Your sales people in flying cars

...does it seem like a distant utopia? This will be reality sooner than you think. That is because the future is faster than you think - says none other than XPRIZE founder Peter Diamandis along with his co-author, human performance-guru Steven Kotler in a book titled just that. This post started as a book review for technology executives on The Future is Faster than You Think but it's really more about the book's implications for strategy.

Why a book review on Infinityn's blog? And why about a futurist book that seemingly has nothing to do with SDRs, sales qualified leads and one that - at a first glance - caters to the crowd of mildly geeky tech enthusiasts?

The short answer: because this book has everything to do with tech enterprises' future - and at its core, the book is about more than technology.

Some more context for covering this book: Infinityn's founder and leadership team share a strong conviction that social transformation and technology are making the world a better place - in a measurable way. It is this conviction why we initially set out on a journey to help companies spread their technology products.

Not just any futurist book

Is this just another utopistic book lauding new technology and hoping it will solve the world's problems? Hardly. Co-author Peter Diamandis is at the epicenter of exponential tech entrepreneurship, a super-connected MD, biologist and entrepreneur. He has insider access to the minds and circles of influence building tomorrow's technologies. 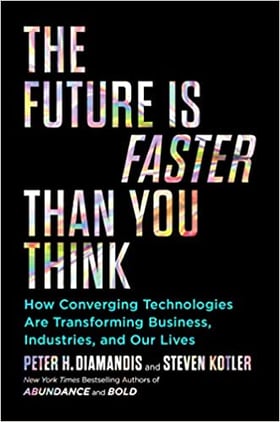 "The Abundance 360 members & the high profile XPRIZE board that Diamandis has cultivated plays an active part in community, tackle new challenges with XPRIZE, go on trips to the most tightly-controlled labs, centers for disease & aging as well as obtain courtside access to the latest technologies that most aren’t even aware of yet.

- reports Forbes. In this book, the authors argue: ideas that feel like they're from a sci-fi movie today are in reality, just around the corner; due to launch in a few years' time. This is because - and here is where it gets interesting for the tech executive - there are a few enablers of change that converge and actually speed up the already-wicked-fast pace of innovation, a new mega-trend: the acceleration of acceleration. In this post, we're going to take a look at the most significant of these enablers.

First, it's important to point out that for much of human history, the speed of development had been linear. A simple example to depict this acceleration is demonstrated by the invention of socks thousands of years ago. The authors note, that "socks couldn’t be invented until a materials revolution turned plant fibers into soft fabrics and a tool-making revolution turned animal bones into sewing needles.” The surprising thing is that each of the steps to "sock-dom" took thousands of years to achieve; eons separate the appearance of the first needles from the manufacturing of soft fabrics.

Today's mind-blowing rate of advancement in virtually any industry is almost infinitely faster than anything before the industrial revolution. Take the exponentially increasing speed of going from no cars, to cars, to self-driving cars, to flying cars; it took about 100 years to go from a Ford T-model car to the first electric car - a century, which is already one-tenth the time-span as in the case of socks. Experts agree that during that century, the principles behind the mechanics of cars haven't changed - the diesel/petrol engine has stayed fundamentally the same, albeit major improvements in performance.

Then, all of a sudden, over the past 15 years, we're seeing electric cars being produced en masse, self-driving vehicles gradually going mainstream and - according to the authors - by 2025, Uber will have launched an aerial ride-sharing service. For these major shifts, the automobile industry is taking only 25 years, or a quarter-century. The speed of change is picking up at an astounding rate.

The book gives awing examples of solutions, which, one might think belong in sci-fi literature or are at least decades away in the future. The authors also provide enough proof for most predictions to make them very believable - so much that we can't help but start to wonder about their implications to our businesses in the coming years. A few of these examples:

One exciting question for us is: what is causing this rate of unprecedented growth. The answer lies in the compounding effect of

Where Sales Development steps in

The diffusion, the spreading of B2B technology-products is taking new forms, just like there are new enablers for the spreading of mind-blowing consumer-technologies mentioned in the book. It's easy to see how this leads us directly to sales development, but hold on to that thought for a minute.

Humans are also becoming more enabled, and this is where the co-author Steven Kotler has vast experience. In the last chapter of the book titled "The Five Great Migrations", Kotler refers to the concept of flow, the peak performance mental state as a path to higher productivity, innovative thinking and faster learning. His company, the Flow Research Collective pioneers the way for companies and individuals to "manufacture flow" in their everyday lives. But, there is even more to the human-side.

There are thought-provoking projections and shockingly real experiments being conducted successfully and that represent an almost frightening convergence between bio technology and artificial intelligence. Just two examples from the book:

Circling back to our original topic, this book's relevance for enterprise tech business: these advancements are already having major implications for our seemingly less sexy, albeit hugely important area in the accelerating future - sales development.

Sales development today is a major enabler in getting tech products (which are really innovations that have been productized) into new markets, eventually to the end users. With the general acceleration of technology and human potential, the "controlled diffusion of technology products" - a.k.a. sales development, has to keep pace.

It's amazing to think of the new tools we, sales developers use every day that help with this; some have not been accessible or haven't even been created a mere decade ago. We're thinking about the subtle superpowers of Aircall and even platforms like HubSpot, but the list is obviously much larger. A key reason that we're able to use these is that their global sales organizations did the right things to get the products in our hands here, in Budapest.

The "Why" behind what we do

This book, while it has a different focus, kept reminding me of the fact that it's never enough to build something remarkable. We know by now that "they will not come, if you just build it". Getting great products out there takes intent; and a major part of that intent is outbound sales.

On the human side, we're happy to report that having partnered with Steven Kotler's company, Flow Research Collective has helped up our "human-game". We've been implementing various initiatives as taught by Kotler's team to create flow. We've also been consciously engineering happiness and thus have increased our team's performance.

This calling to accelerate the diffusion of technology is a huge part of why we at Infinityn get up every day. Sales development in the tech sphere is about much more than just getting qualified leads. It is about playing a role in accelerating acceleration. There needs to be a better, more efficient, more intelligent way of getting enterprise tech products to new markets - and we couldn't be more thrilled to be pioneers in this field.

The mega-trend of accelerating acceleration admittedly has a scary side to it because the future does carry both uncertainty and dangers. We are not naive; new challenges, real problems - serious ones - will inevitably arise as humanity is creating new realities. They always have. But what we gather from historical evidence is this: the solution to the ecological, technological, societal and even psychological side effects that progress creates is: more progress.

Creating better technology, becoming better humans and a more coherent and efficient society. We're involved on all three fronts of progress and get to experience Tony Robbins' axiom daily:

Challenging From Lead To Close